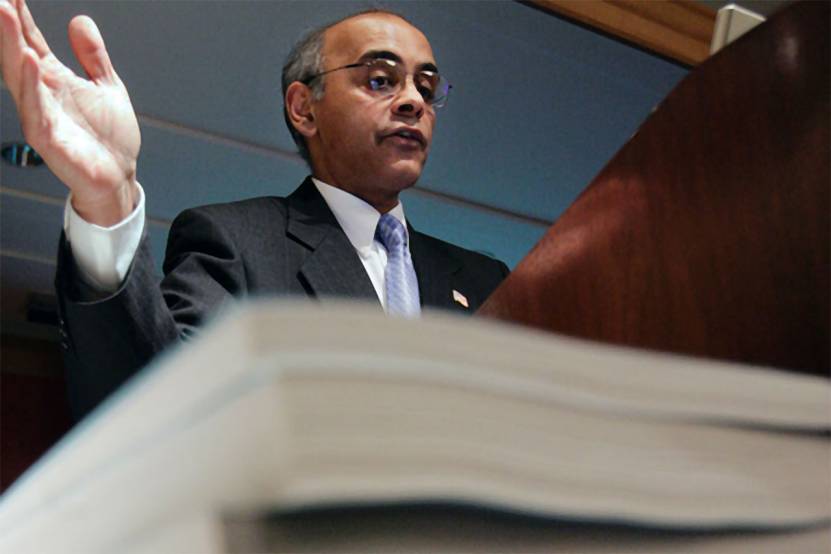 Originally published by Architects and Engineerrs for 9/11 Truth (AE911Truth)

A recently discovered eyewitness account of an “incredibly loud explosion” during the destruction of World Trade Center Building 7 on September 11, 2001, has put the National Institute of Standards and Technology in a very uncomfortable position.

NIST claimed in its 2008 report on Building 7 that there were “no witness reports” of an explosion when the 47-story skyscraper fell symmetrically into its own footprint. The account of correspondent Gigi Stone Woods, who was reporting that day for local cable news channel NY1, categorically contradicts NIST’s claim.

NY1 reporter Gigi Stone Woods on September 11, 2001: “All of a sudden, a loud, incredibly loud explosion.”

Anyone familiar with the unscientific way that NIST conducted its investigation would expect the agency to simply ignore Woods’ account. But that won’t be so easy in this case because of the pending “request for correction” submitted last April by Architects & Engineers for 9/11 Truth. The organization is now leveraging the request for correction to compel NIST to interview Woods, who confirmed her account to AE911Truth in January 2021.

AE911Truth did not become aware of Woods’ account until September 28, 2020, the same day that it filed its appeal of NIST’s initial denial of the request for correction. After the nonbinding 60-day deadline for NIST to respond to the appeal came and went, AE911Truth submitted Woods’ account — along with three other corroborating eyewitness accounts — as a supplement to both the request for correction and the appeal.

At the time that AE911Truth submitted the supplement in early December, however, the organization was not sure of the identity of the journalist who reported an “incredibly loud explosion.” In the letter to NIST dated December 7, 2020, AE911Truth stated that it “appeared” to be NY1 correspondent Annika Pergament.

That view changed a few weeks later when Ted Walter, AE911Truth’s director of strategy and development, received a Facebook message from cameraman Basche Warner. Walter had contacted Warner two months earlier because Warner had been identified by the reporter in the clip as the cameraman responsible for shooting the footage.

Warner wrote in his message to Walter: “Yes, I shot that video. It was WTC 7.” In a follow-up message to Walter, Warner advised that the reporter was actually Gigi Stone Woods and not Annika Pergament.

Walter then contacted Woods to ask her to confirm her statement of 19 years earlier, and that is just what she did in an email response on January 4, 2021. In her reply, she stated, “All I remember is that we were reporting near building 7 [sic] heard a loud explosion and people yelling to run and we all did.”

Gigi Stone Woods confirms via email that she is the reporter who described an “incredibly loud explosion” when Building 7 went down on September 11, 2001.

In a letter to NIST on January 8, 2021, Walter provided the correct identity of the reporter, along with her contact information, and urged NIST to interview her.

What NIST does now will be very revealing.

According to Walter, if NIST does not contact Woods and ignores her account, it contravenes the Data Quality Act, which requires NIST to issue information that is objective and unbiased. Failing to contact a witness whose account categorically contradicts the claim made by NIST would demonstrate NIST’s bias and would thus make the agency vulnerable to legal action.

If, on the other hand, NIST contacts Woods to confirm her account, Walter foresees that NIST will have little choice but to retract its claim that “there were no witness reports” of a loud explosion — unless NIST pressures Woods into altering her story.

“This could be the first big step toward forcing NIST to reverse its conclusion altogether,” Walter says.

NIST based its claim that there were no witness reports of a loud explosion on the false premise that the quietest way to destroy Building 7 would have been to use nine pounds of RDX explosive to sever one column, and this would produce a sound of between 130 and 140 decibels. NIST then claimed that no one had reported such a loud sound.

In the request for correction, AE911Truth pointed out that it is false to assume that RDX is the only material that could have been used. (NIST’s assumption ignores the possibility of noise abatement in the form of thermite-based devices, for example.) Furthermore, AE911Truth argued that it is categorically false to assert that no one heard a sound loud enough to be an explosion.

In fact, in addition to the Woods account, there were several others indicative of explosions that AE911Truth included in Section G of the request for correction:

In its denial of the request for correction, NIST avoided addressing any of these specifically, instead simply stating that it had studied many accounts and reviewed numerous video clips and that it “disagreed” with the conclusions reached by AE911Truth.

The accounts of Barry Jennings, the New York City Housing Authority’s deputy director of the emergency services department, and Michael Hess, the New York City corporation counsel, are also a major aspect of this section of the request for correction. The two described going into Building 7 and up to the 23rd floor, which is where the Office of Emergency Management’s Emergency Operations Center was located. Jennings and Hess found the EOC abandoned.

NIST contends that the two went to take an elevator to exit the building, but the lights flickered and the elevators ceased to function because of the collapse of the South Tower at 9:59 a.m. So instead they took a stairwell and made it as far down as the 6th floor when the collapse of the North Tower at 10:28 a.m. filled the WTC 7 stairwell with smoke and debris.

But this scenario is seriously problematic. First, it ignores clear statements from both men that they witnessed an explosion in the stairwell that destroyed the 6th floor landing. (Later, Hess changed his account to align with NIST’s, but Jennings maintained his version.) Second, this scenario requires that Jennings and Hess were only able to descend 17 floors in 29 minutes, an average of one minute and 42 seconds per floor. Given that Jennings described hurrying down the stairs — “instead of taking one step at a time, I’m jumping landings,” Jennings told the BBC — the timeline is simply not credible.

True to form, NIST offered an outrageously inadequate two-sentence response to AE911Truth’s argument regarding Jennings and Hess: “NIST disagrees with the assertion that it distorted eyewitness reports of an explosion occurring inside WTC 7. The rescue events documented in NCSTAR 1-9, Section 6.5.2, are based on eight independent interviews.”

The impossibility of Jennings and Hess taking 29 minutes to descend 17 floors was subsequently reinforced by another newly discovered account that AE911Truth included in the December 2020 request for correction supplement — that of FDNY lieutenant Brian Becker, who was working with a team to evacuate people from the North Tower.

Starting from the 30th or 31st floor about one minute after the 9:59 a.m. destruction of the South Tower, Becker’s team was able to leave the North Tower and get 50 yards away from the base of the building when it began to come down at 10:28 a.m. Becker also described stopping to check floors as they descended. 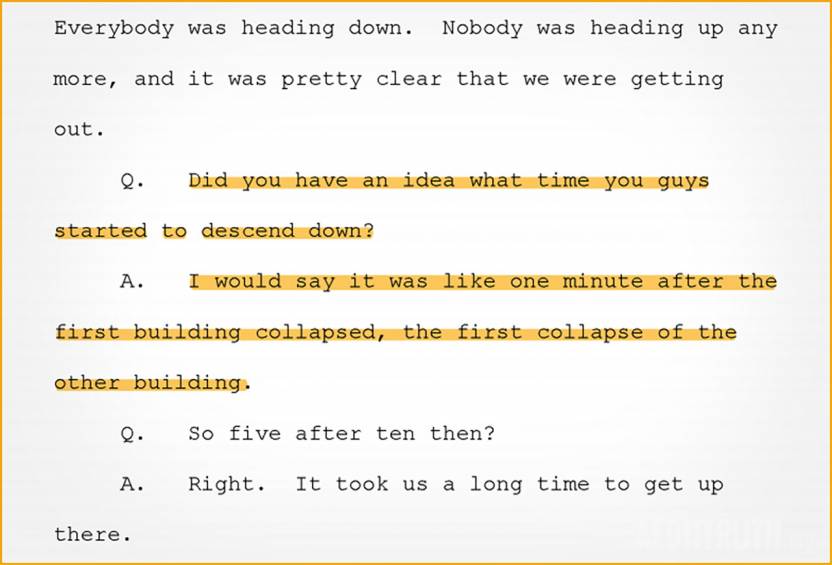 The oral history of FDNY Lieutenant Brian Becker, whose team evacuated from approximately the 30th floor of the North Tower after the South Tower came down at 9:59 a.m.According to Walter, Becker’s account provides crucial substantiation that it could not have taken Jennings and Hess 29 minutes to descend 17 floors, unless their descent was significantly slowed for some reason that NIST does not give in its report.

“NIST is now in the unenviable position of having to explain why it took Barry Jennings and Michael Hess 29 minutes to get from the 23rd floor to the 6th floor,” Walter said. “Or they can just tell the truth and acknowledge that Jennings and Hess witnessed an explosion that happened well before the destruction of the North Tower at 10:28 a.m.”

The ball is now squarely in NIST’s court.