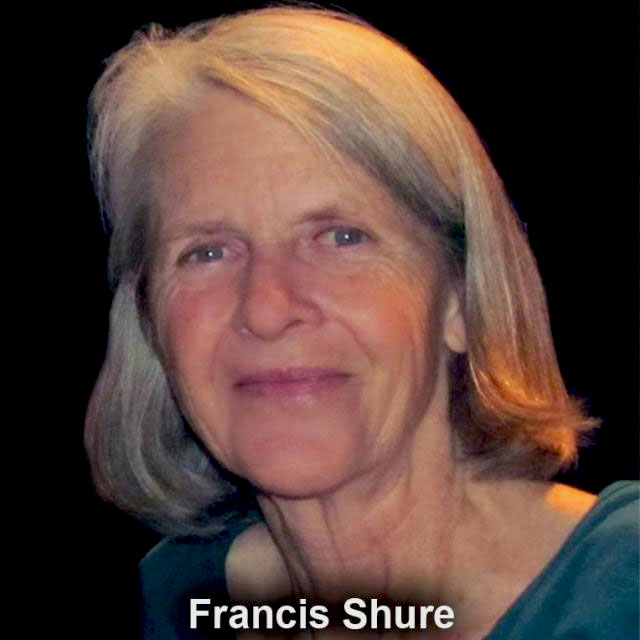 Right after 9/11, I remember talking to my women’s group and saying I just don’t think this could have happened without someone knowing about it and allowing it to,” says Fran Shure. “It was totally intuitive, because I knew nothing. And that was received with a lot of censoring remarks. I just looked at them and said, you know, I have the right to think the unthinkable and I’m going to look into this. And lo and behold, a video came my way and then a book and I was in shock, like most people would be, reading about evidence that showed we were not told the truth about what happened on 9/11.”

A retired psychotherapist and landscape designer who successfully juggled both professions for 30 years, Shure grew up in Texas and has spent most of her life in Colorado. The many causes she has championed include working for a freeze on nuclear weapons, the anti-globalization movement, and recently, the Colorado Community Rights Amendment allowing communities to exclude heavy industry (such as fracking) from their communities, due to deep concerns about fracking’s largely untested consequences for the environment. Initial doubts about what really happened on 9/11 and her subsequent inquiry ultimately spurred a kind of spiritual metamorphosis that continues to this day.

FRAN SHURE WAS IMMEDIATELY SKEPTICAL THE ATTACKS OF SEPT. 11, 2001 could have taken place without some sort of advance knowledge. After studying extensive written and video evidence, she is convinced that an objective scientific investigation was never initiated.

The book she refers to was The War on Freedom by Nafeez Mosaddeq Ahmed. After reading it several times, she sent a summary to her Representative Diana DeGette and met with the congresswoman’s executive director. “He took me very seriously, and that got me on a roll,” Shure says. She eventually co-founded a local group, Colorado 9/11 Truth, dedicated to educating the public about evidence indicating the official story is not the whole truth, or perhaps even close to it. Colorado 9/11 Truth members have worked to bring this evidence to the public through documentary premieres, monthly meetings in Denver and Boulder, and persuading local media to broadcast and stream important content, among many other efforts.

“Looking at it, we have two theories,” Shure says. “The term ‘conspiracy’ is defined as a secret plan by two or more people to do something that’s illegal or harmful. So for 9/11, we have basically two conspiracy theories about what happened on that day: the official conspiracy theory, that 19 Muslims (members of Al Qaeda and directed by Osama bin Laden) caught our military off guard and attacked us. We were told they did this because they ‘hate our freedoms.’ The second conspiracy theory has two branches of thought. The first branch believes elements within our government knew the attacks were going to happen and allowed them. The second believes the 19 Muslims may have indeed planned the attacks but were ‘patsies,’ and that elements within our government actually orchestrated the attacks. Both branches believe the motivation by these forces within our government was to provide a pretext for going to war in the Middle East for oil and other resources. You have to look in a scientific way at these theories and ask: which one does the evidence support?”

Evidence that convinced Shure and others begins with an air defense failure. “According to Air Force manuals, any time an airplane goes off course or communication is lost the FAA automatically informs NORAD; within 10 minutes a plane has left and is usually on the tail of such a plane to see what’s wrong. It also takes only a couple of seconds to press a hijack code; none of the pilots of the four planes did. Those were the first things that caught my attention.”

She also found evidence of an “intelligence failure.” “For example, there were some FBI agents doing their best to get to Attorney General John Ashcroft to tell him they knew an attack was going to happen, the date, and almost the precise time, but he would not answer their telephone calls. So they went to David Shippers (chief counsel during the congressional probe of Bill Clinton; he was also working with and had many contacts within the FBI). Shippers also tried his best to reach Ashcroft, but Ashcroft would not return his phone calls. So these are all big red flags.”

In 2004 Shure learned of evidence that the Twin Towers came down at near “free fall” acceleration. “And then there was Building 7 that came down exactly at free fall and common sense physics tells you no object can drop at free fall without the material holding it up having been removed prior to the falling,” she says. “For me, that was the big shock. I thought – oh, now I see it wasn’t just someone allowing this to happen, there was orchestration. And further research validated that for me.” Much of this further research is presented in the documentary 9/11: Explosive Evidence, Experts Speak Out, which interviews prominent architects and engineers as well as Shure and other psychology professionals. The film is particularly focused on discrepancies between the official story and footage/eyewitness evidence of the collapse of the Twin Towers and Building 7.

Prompted by her initial doubts, Shure listened carefully to people’s first reactions upon hearing the evidence she presented that contradicts the official version of what happened that day. These spontaneous responses, along with her deep psychological grounding, form the backbone of her extensive article, Why Do Good People Become Silent—or Worse—About 9/11?, which she has been urged to publish as a book. “There’s a kind of energy and extreme honesty in those immediate responses,” says Shure.

Common theme? “Fear,” Shure says. “Fear that I better not go there – because if I believed that, I would be ostracized by my family and friends. A lot of it is really fear of having one’s world turned upside down. As Americans we believe we are from an essentially good nation and our government would never do things governments in lesser countries would. And so to challenge that belief is to challenge our identity. We have what’s called a ‘sacred mythology’ that explains who we are and why we’re doing what we’re doing. Our sacred myth concerning 9/11 is that we were caught off guard by 19 Muslims who attacked us, but we rose to the challenge to rid the world of terrorists, and this is why we now have an unending global ‘War on Terror.’ It is up to each of us to study the evidence on both sides of this issue to see if we believe this sacred myth, or not.

“As a result of 9/11,” Shure says, “we have a war on terror that will not end in our lifetime … over a million people killed in Iraq, millions maimed, and all these refugees. For me it is a spiritual issue not to be silent. I’ve learned that human fear is something one has to face until we’re enlightened. One of the ways for me to grow spiritually is to not let fear run my life. That made it relatively easy to face the fear, the darkness, and proceed.”

So what really happened and what was the government trying to accomplish? “We’re not claiming to know,” Shure says. “We’re saying, look, we need to get to the truth because we’re wreaking havoc on the whole world. Any investigation needs to look at who’s benefiting, but we haven’t had a real investigation. Even the chairs of the 9/11 Commission said they were set up to fail. They could not get people like Bush and Cheney to talk under oath, NORAD would not give them the truth about the air defense failures, and a full quarter of the footnotes in the 9/11 Report was information that came from people who were severely tortured. The 9/11 commissioners could not interview the detainees nor could they interview the interviewers of the detainees.”

In response to a prevailing perception that those questioning the government’s story on 9/11 are lunatic-fringe “conspiracy theorists,” Shure cites a recently published book by Florida State University Professor Lance deHaven Smith, Conspiracy Theory in America, which contends that the very term ‘conspiracy theory’ was introduced by the CIA into the media worldwide around 1967 as a derogatory term to discredit anyone not believing the Warren Commission Report on the assassination of JFK.

“At that time there were a lot of prominent people saying, this does not make sense,” says Shure. “The CIA conducted a psychological operation and took talking points such as, ‘how could they believe such a silly thing,’ ‘someone would have talked,’ and ‘the government is much too incompetent to pull something like this off.’ This wound up being a highly successful campaign to discredit anyone, any time, who questions what the government tells us. Now we’re immediately labeled ‘conspiracy theorists’ to stop all conversation.”

Shure admits that she, too, was affected by this attitude earlier in her life, and she remains empathetic with the difficulty people have considering the evidence about 9/11 for themselves. “I truly believe those of us who are in the 9/11 Truth movement have had our own moments of denial in order to avoid the anger, fear, grief, and sleepless nights. What I’m writing about are very human responses and we need to have compassion for ourselves and others. Sometimes people just carry too much inside to be able to listen. We need to proceed along and find people who have the fortitude to receive this information and go through their own transformation.”

Finding such people could be a very slow process, but this may actually be important to its success. “It’s natural and probably good the information slowly finds its way into the public eye. Because I think it’s such a shock to receive this. To be shown that the evidence tends to point to people who are supposed to be our protectors. From psychology we know that is very damaging to one’s whole belief about how the world is supposed to work.”

In the end, Shure believes looking at the evidence, and facing the fear that what we believe happened on 9/11 might be wrong, offers enormous potential for personal and collective healing. “As a psychotherapist I know you don’t heal old traumas until you can face and feel the truth. I cannot see how it would be any different on the collective level. By letting ourselves open up to a challenging experience and go through the process that takes us to the other side of the darkness and the fear, we become much more mature human beings and a much more mature country.”